Virginia planter William Byrd was not impressed with his North Carolina neighbors.  Traveling through North Carolina in the early 1720s on a mission to survey the boundary between the two colonies, Byrd griped about the irregular supply of alcoholic beverages in the colony. Byrd believed the shortage of alcohol in North Carolina was not the result of any moral qualms about drinking but rather a consequence of the improvidence of its early settlers. When it was available, North Carolinians drank imported rum in great quantities, and generously shared it, but these periods of plenty were frequently interrupted by periods of scarcity, when it was hard to find a drop. Apple and peach orchards might have obviated these irregularities in the alcohol supply, providing the ingredients needed to make cider and cider brandy, but it appeared to Byrd that few North Carolinians had bothered to plant them.  He attributed this oversight to lack of industry and foresight, particularly among the common planters, whom he called “Improvident People, who take no thought for the Morrow.” But Byrd did acknowledge that their might have been one other hindrance to the development of orchards in North Carolina.  It appears that massive flocks of the once abundant but now extinct Carolina Parakeet descended upon the colony’s orchards in the summer.  The birds “bite all the Fruit to Pieces in a moment, for the sake of the Kernels.  The Havock they make is so great, that whole Orchards are laid waste in spite of all the Noises that can be made, or Mawkins that can be dresst up to fright ‘em away.”

The Carolina Parakeet was not a parakeet at all, but North America’s only indigenous parrot.  Despite Byrd’s belief that they were only a threat to North Carolina’s orchards, the Carolina Parakeet was climate hardy, had a quite diverse diet, and a wide geographical  range. It could be found in forest lands as far north as New York, and as far west as the Mississippi valley.  A gregarious creature, Carolina Parakeets traveled in flocks often containing five hundred or more birds, fed itself on the seeds and nuts of the forest, and nested in the cavities of hollow trees.

In the first two centuries of English colonization in North America, Carolina Parakeets and were abundant, but populations began to plummet in the second third of the nineteenth century.  Sometime in the early twentieth century, the Carolina Parakeet became extinct. Byrd was not the only observer to comment on the Carolina Parakeet’s habit of destroying an orchard full of fruit in short order. In 1831, John James Audubon noted that it: 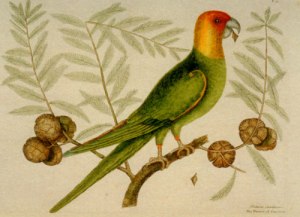 eats or destroys almost every kind of fruit indiscriminately, and on this account is always an unwelcome visitor to the planter, the farmer, or the gardener. . . They assail the Pear and the Apple-trees when the fruit is yet very small and far from being ripe, and this merely for the sake of the seeds . . . they alight on the Apple-trees of our orchards, or the Pear-trees in the gardens, in great numbers; and as if through their mischief, pluck off the fruits, open them up to the core, and, disappointed at the sight of the seeds, which are yet soft and of a milky consistence, drop the apple or pear, and pluck another, passing from branch to branch, until the trees, which were before so promising, are left completely stripped, like the ship water-logged and abandoned by its crew, floating on the yet agitated waves, after the tempest has ceased.

Do not imagine, dear readers, that all these outrages are borne without severe retaliation on the part of the planters.  So far from this, the Parakeets are destroyed in great numbers, for whilst busily engaged in plucking off the fruits or tearing the grain from stacks, the husbandmen approaches them with perfect ease and commits great slaughter among them. All the survivors rise, shriek, fly around for a few minutes, and again alight on the very place of most imminent danger. The guns kept at work; eight or ten, or even twenty  are killed at every discharge. The living birds, as if conscious of the death of their companions, sweep over their bodies screaming as loud as ever, but still return to the stack to be shot at, until so few remain alive, that the farmer does not consider it worth his while to spend more of his ammunition. I have seen hundreds destroyed in this manner in the course of a few hours . . .

Other observers also noted that the close bonds Carolina Parakeets formed with others in their flock made them easy prey for an angry farmer. The ease with which farmers slaughtered the grieving birds was no doubt one factor in their extinction, but does not completely explain their disappearance.  While stories of their dramatic and rapid destruction of orchard fruit were frequently repeated, they were not so common that they constituted the orchard’s greatest natural threat. And many farmers recognized the Parakeets value in helping rid his land of another pest. The poisonous cockle-bur, which invaded farm fields and sometimes killed livestock was among the Parakeet’s favorite foods, and no farmer minded when the Parakeets rid his field of them.

Habitat destruction may have played as great a role as the farmer’s gun, as fields and 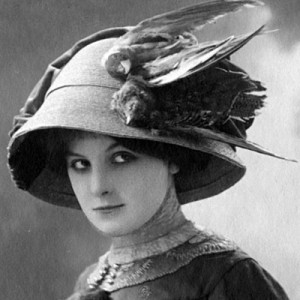 orchard replaced the forests in which the birds nested. The Carolina Parakeet may have also suffered from new competition for nesting sites with the arrival of an insect colonizer, the European honeybee, which filled the hollows of many potential trees with honey and honeycomb. Other factors which also contributed to its demise include the demand for hats decorated with dead birds which became all the rage near the end of the 19th century, and the last of the birds may have been felled by disease they picked up from domesticated poultry. In the end, Euro-American husbandry practices appeared to be a greater threat to the Carolina Parakeet than it was to the farmer’s orchards.