Between May 13 and May 23, 2013, I co-taught a study tour of Civil War battlefields with a colleague. While this was the sixth time I have offered this study tour for undergraduate students, I decided at the outset that I would use this opportunity to gather information about orchards on Civil War battlefields.  I was aware of the “famous” peach orchard where many men died on the field at Gettysburg, and was aware of a few other references to battlefield orchards, but was surprised at the abundance of information I uncovered on the eleven day trip.  This is the fifth in a series of blog posts on orchards and the Civil War. 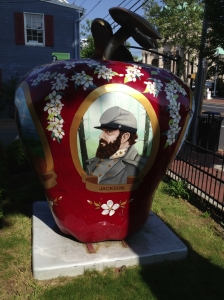 The first time I encountered the Stonewall Jackson Apple it made sense to me.  It was about six or eight years ago, on the last day of my biennial Civil War study tour, and we had already visited almost every Jackson shrine and monument Virginia had to offer. It was during the tour of Stonewall Jackson’s home in Lexington, Virginia, that a strange thought popped into my head: “This guy is a little bit like Johnny Appleseed.”  The comparison, on the face of it, seems absurd. Stonewall Jackson was a fierce and unrelenting warrior, celebrated for his battlefield victories; Johnny Appleseed was remembered for his gentleness and his pacifism, and a respect for life that ran so deep he was loathe to kill even a mosquito. The two men were not even of the same generation.  John Chapman was fifty years old and planting apple trees on the northern edge of the Ohio Valley when Thomas Jackson was born on its southern boundary in Clarksburg, (now West) Virginia. Both have been elevated to sainthood by people in their respective regions. But the similarity stops there.  Maybe. 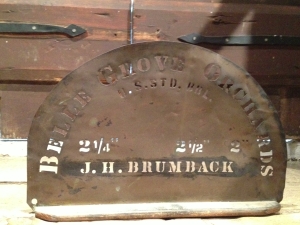 This apple barrel stencil at the Belle Grove plantation is evidence of the commercial importance of apple growing on that Shenandoah Valley farm.

The Stonewall Jackson Apple can be found in Winchester, Virginia, at the lower (northern) end of the Shenandoah Valley. And the artist who painted Stonewall Jackson’s visage on a giant apple probably didn’t intend to make a Johnny Appleseed association. He was simply combining two things for which Winchester is known: Stonewall Jackson and apples. Jackson’s time in Winchester was brief, but it was at the height of his fame. He used a home in Winchester as his headquarters in 1862, while he engineered a brilliant military campaign driving Union forces out of the Valley and threatening to bring the war into the North. That headquarters and brief residence is now one of Winchester’s more popular tourist destinations, and has been a regular stop on our Civil War study tour. 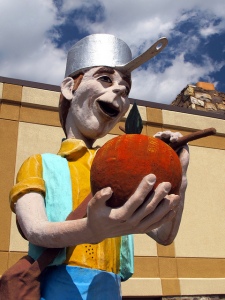 Winchester’s association with the apple predates the Civil War.  The Shenandoah Valley was Virginia’s richest apple-growing region in the mid-19th century, and while the Valley’s fertile fields earned it the nickname “The Breadbasket of the Confederacy” during the war, it might have also been called “The Orchard of the Confederacy,” because tree fruit was another very successful crop.  The Belle Grove Plantation, which sat in the middle of the Cedar Creek battlefield in 1864, has re-established a small heritage apple orchard and also has on display the apple barrel stencil used by Bell Grove’s planters in the 19th century. The Valley’s orchards were no doubt plundered by Sheridan’s marauding armies during the Fall of 1864, but they survived the war more or less in tact, and apples continued to be an important valley crop all through the next century. New Market, Virginia, further up the Valley still has a Johnny Appleseed Restaurant, and Winchester has been hosting an annual Apple Blossom Festival for about ninety years. While there is no real evidence that John Chapman ever visited the Valley, like most of the nation’s apple-growing regions it nevertheless still has a few of its own Johnny Appleseed legends. 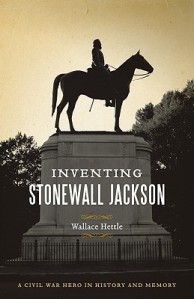 The similarities I found between Stonewall and Appleseed had less to do with the actual men than with their myths.  In my essay, “The Invention of Johnny Appleseed,” and also in my book, Johnny Appleseed and the American Orchard, I argue that the Johnny Appleseed legend largely took form during the Victorian era, and as a result reflects that era’s values and obsessions. So I was pleasantly surprised this year when we stopped at the Stonewall Jackson House in Lexington, Virginia and I stumbled across a fascinating and relatively new book by Wallace Hettle titled Inventing Stonewall Jackson. Hettle explores the myth of Stonewall from many angles, and I cannot do justice to his sophisticated and nuanced argument in this blog post. But Inventing Stonewall Jackson affirmed for me that some of the most prominent features of the Stonewall myth emerged in the Victorian era. 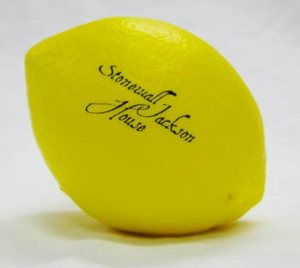 Stonewall Jackson foam stress-relieving lemons are available in the gift shop at his Lexington, VA home.

Despite the profound differences in the way these two men lived, there are at least three prominent elements of their myths–each celebrated by Victorians–that Stonewall and Appleseed share: eccentricity, piety, and domesticity. Jackson’s penchant for sucking on lemons and holding one arm straight up in the air as he rode on his horse are two stories which are still told today, and Appleseed of course is remembered for his peculiar eating habits, dress, and penchant for going barefoot in even the worst weather. 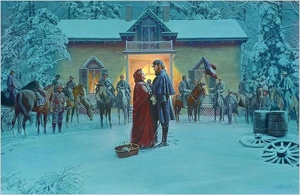 Popular Civil War Artist Mort Kunstler depicts a farewell scene with his beloved wife, in front of the Winchester home that served as his headquarters.

Jackson’s deep and very public faith is a central feature of his legend, and his death in battle has made him a Christian martyr to many. Rosella Rice, one of Appleseed’s most important hagiographers in the late 19th century, also sought to present him as a martyr of sorts, declaring that “His bruised and bleeding feet now walk the gold-paved streets of the New Jerusalem, while we so brokenly and crudely narrate the sketch of his life— a life full of labor and pain and unselfishness; humble unto self-abnegation . . .” 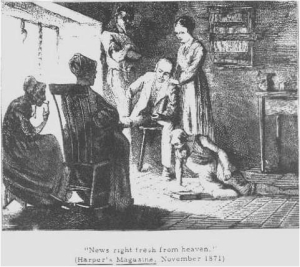 Finally, despite the fact that Stonewall left his family to take up the sword, and Chapman was a life-long bachelor, the Victorian hagiographers of each man threaded domestic virtues into each man’s story. Stonewall, we are constantly reminded, was a devoted husband and had special affection for children. Appleseed shared that fondness for children and helped to sustain families by visiting their cabins and reading the Bible to attentive frontier families. 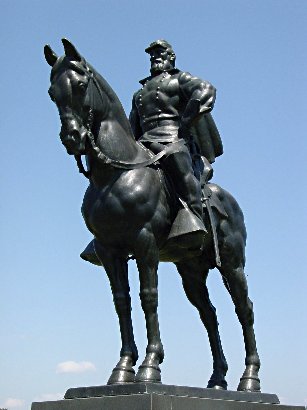 The steroid-infused version of Jackson and his horse “Little Sorrel” on the Manassas Battlefield.