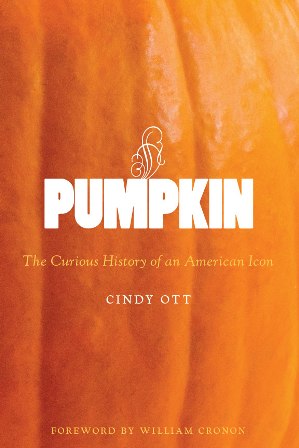 I am not a big fan of pumpkin pie. The bland flavor and gummy texture is quite unappealing to me, and I just don’t get this whole pumpkin-flavored latte, ice cream, and yogurt craze.  But I am a huge fan of Cindy Ott’s new book, Pumpkin: The Curious History of An American Icon.  Before opening its pages, I had no burning desire to learn about the history of this native, oversized squash.  But once I began reading I could not put it down.  Over the last decade or so, I have been thinking, reading, and writing about the American history of a non-native fruit–the apple–carried to the Americas by European invaders.  While I’ve been pondering the impact of the apple on North America, its role in the expansion of the Euro-American societies who brought it here, and its adoption by indigenous peoples, Cindy Ott has been writing about the story of the native pumpkin, its use by these invaders, and how it ultimately emerged as a symbol prized more for its cultural than its economic value.

While Americans today distinguish the bright round orange pumpkin from other varieties of squash, the two are in fact genetically identical and can cross-pollinate.  For

Native peoples of eastern North America, squash was one of the “three sisters,” along with corn and beans, which were the core of Native American agriculture.  The three food crops were complementary both ecologically and nutritionally.  Squash were easy to grow in abundance, and “could be preserved over the winter, when other food items were scarce.”  Europeans came to the Americas with a certain finickiness born of a sense of cultural superiority, and did not immediately embrace the pumpkin.  But they brought the seeds back across the Atlantic and within a few decades of Columbus’ first voyage, New World pumpkins had spread across Europe, where they were regarded with a mix of fascination and disdain.  “As a sign of human nature,” Ott informs her readers, “the pumpkin embodied unbounded lust or lack of civility; as a symbol of a place, it represented the untamed natural bounties of North America; and as an emblem of  a way of life, it stood for a rustic peasant existence.”  But mostly they saw the pumpkin as food for the poor, and for those barely civilized Europeans who had migrated to the New World.  New England’s religious dissenters soon came to appreciate its value, especially in lean times.  The pumpkin became for poor farmers short on labor something like the untended seedling apple tree–a useful food plant which would bring forth a bounty even when neglected.  But for the wealthy and the refined, the pumpkin was a symbol of the lowly and uncivilized.

For several hundred years, farmers grew pumpkins to supplement their families’ diet, but they had virtually no commercial value. As advances in transportation technology in the early 19th century drew most American farmers into a market economy, the pumpkin became a symbol of the pre-market, rustic, self-provisioning past. At first this reputation was a liability, but eventually as nostalgia for simpler times grew, the pumpkin’s value as a symbol of those simpler times also increased. Ott concludes that it is not a coincidence that the same Yankee poets and writers who began to celebrate the pumpkin–John Greenleaf Whittier, Sarah Josepha Hale, Lydia Maria Child, and others–also were active in the antislavery movement which championed the moral superiority of the New England family farm tradition over the exploitative plantation system of the South. The pumpkin had become a symbol of those Yankee values.

specialized, producing for national markets. There was no room for the pumpkin in this new agriculture, which had limited market appeal and in an age of mechanization could still only be harvested by hand. The late 19th century pumpkin was “one of the least profitable and palatable of vegetables,” but ironically, its value as a symbol of the agrarian lifestyle continued to grow. Images of pumpkins featured prominently in agricultural periodicals and became central attractions at agricultural affairs, eventually leading to contests to grow mammoth-sized pumpkins. By the dawn of the twentieth century, “American prized the pumpkin for its looks and its meanings, not its meat.”

The Circleville, Ohio Pumpkin Show is one of the largest annual pumpkin festivals.

Across the twentieth century and into the twenty-first, the pumpkin’s appeal–in the form of jack-o-lanterns and the pumpkin pie–continued to grow.  And today urban and suburban Americans venture into the countryside to select pumpkins as decorations, in an effort to connect themselves with a vanishing agrarian past.

There is so much more in this book than this brief and overly simplified description can provide. Ott will make you consider Cinderella’s pumpkin carriage in a new light, and get you thinking about the strange origins of nursery rhyme character Peter Pumpkin Eater, who solved the problem of a wayward wife by putting her in a

pumpkin shell.  Pumpkin: The Curious History of an American Icon is a rich and multilayered cultural, environmental, agricultural, and economic history, offering astounding insights on nearly every page. Highly recommended for pumpkin-eaters and non-pumpkin-eaters alike.

For more information, check out the book’s website, www.pumpkincurioushistory.com

One thought on “Pumpkin: The Curious History of An American Icon”