Fall 2012 issue of the Antioch Review.

“The Invention of Johnny Appleseed” first appeared in the Fall 2012 issue of the Antioch Review.  It is excerpted from the final chapter of Johnny Appleseed and the American Orchard, which is available at finer bookstores and at a number of online sellers, including:

It is also available in ebook form:

A few weeks ago, I connected with Eric Lemay of the New Books Network and recorded this interview about my new book, Johnny Appleseed and the American Orchard, which is now out in ebook form (Kindle, Nook, Sony Reader) as well as hardcover and paperback.

Below is Eric’s introduction to the interview, which is about one hour long.

Not many of us, not even the most ardent foodies, think of the crab apple as a fruit worth eating, 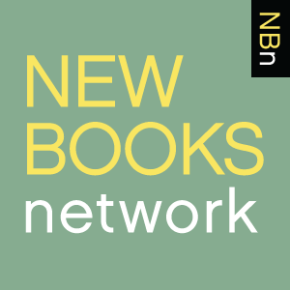 much less extolling, but Henry David Thoreau saw something like the American pioneer spirit in this hard, gnarled, sour hunk of fruit.  In his essay “Wild Apples,” he celebrates the apple because it “emulates man’s independence and enterprise.”  Like America’s first settlers, he goes on, “it has migrated to this New World, and is even, here and there, making its way amid the aboriginal trees.”  He claims that “[e]ven the sourest and crabbedest apple, growing in the most unfavorable position, suggests such thoughts as these, it is so noble a fruit.”

William Kerrigan quotes from this passage at the start of his fascinating book, Johnny Appleseed and the American Orchard: A Cultural History (The Johns Hopkins University Press, 2012) and he shows us the man behind the myth, a man very different from the one we might expect, but a man who nonetheless seems like the real-world embodiment of Thoreau’s thoughts on the apple.  Born in 1774, John Chapman is the planter who would eventually become Johnny Appleseed.  Kerrigan not only tells us the story of his life and afterlife, but also the story of the American apple, which begins, surprisingly enough, in Kazakhstan and goes on to our moment of genetically modified fruits and heritage varietals.

At the center of this story, Kerrigan shows us the journey of an unusual American for his time and then the creation of an unusual—and perhaps timeless—American myth. 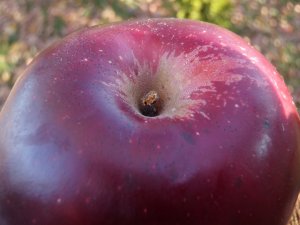 The Arkansas Black. A real alligator horse of an apple.

The Arkansas Black is a real alligator horse of an apple.  Bite into one fresh off the tree, and it will bite right back.  To describe its flesh as “firm” doesn’t adequately describe the fight in this apple.  Its deep red blush makes it perhaps the most beautiful apple God ever created.  And its rebel persistence serves it well.  In early March, when those grocery store apples pulled from their winter sleep  in a nitrogen-infused, controlled atmosphere storage facility taste bland and mealy, an Arkansas Black plucked from the cellar is a delight to eat, its sharp acidity and rocky firmness having mellowed with age.

Many Americans associate the peach with the South, and the apple with the North.  But the South has a long and proud tradition of producing distinctive apple varieties.  No man has done more to preserve the southern apple tradition than Creighton Lee Calhoun, who has spent decades crossing southern hill country seeking out the last specimens of old local varieties.

The result of those efforts is his encyclopedic work Old Southern Apples.  First published in 1996, the book quickly sold out, and used copies fetched upwards of $200 on the secondary market before  Calhoun published a revised and expanded edition  in 2011.    The book begins with a nice history of the apple in the South, and is followed by a section on Southern varieties that are still available, and finally a section of extinct varieties.  In the middle of this handsome book are 123 beautifully reproduced full color plates from the USDA Pomological Watercolor Collection, housed in the National Agricultural Library in Beltsville, Maryland. Old Southern Apples was an indispensable reference guide for me while researching Johnny Appleseed and the American Orchard.  Anyone interested in apples, not just southerners, will find it chock full of valuable information, as many of the apples listed were also grown in other regions of the country.  It is also a delightful book to browse, and each return visit to the book rewards the reader with fascinating new information about Rusty Coats, Pippins, Limbertwigs, and other forgotten delights from the golden age of the American apple.  Peruse it with a local apple in your hand.  Just be careful to keep the juice from dripping on the beautiful watercolor plates.

For more about Calhoun, you can check out this three part youtube interview with the author: